The College’s student newspaper, The Vanguard, gives you experience reporting on events and programs, conducting interviews, and writing and editing stories.

How to Get Involved

If you are interested in writing for The Vanguard stop by their office located in the Student Leadership & Involvement Center, S1-12.

Overcoming Depression and Empowering Yourself

“To be or not to be, that is the question…” This was the question that was asked in the famous Shakespearean Hamlet, when the lead character Hamlet was questioning himself of whether he should live or die. Unfortunately, many individuals in their youth are asking themselves that same question, and their choices usually have a tragic ending. What brings about this dramatic choice falls under the topic that not many people wish to bring to the table: depression. Depression happens more often than people like to think. According to a website called Depression and Bipolar Support Alliance, “Major depressive disorder affects approximately 17.3 million American adults, or about 7.1% of the U.S. population age 18 and older, in a given year. (National Institute of Mental Health “Major Depression”, 2017)”. Depression can also be like a chameleon: invisible, yet still there. The reason I say this is because often people who experience depression and die by suicide, are the ones you’d... more

It’s a new year and thoughts of self-development are stranger than usual. I have the same run of mill fitness goals as everyone else but aside from those this year, I aspire to consume more local art. That sounds great and dandy but as a student that can be expensive. When I can afford it, I love supporting my local artists but when a free or donation-based opportunity arises I jump. Jazz Jam with Omar’s Hat is one of my new favorite inexpensive nights out.

When I arrived at World Café Live at the edge of University City, I was pleasantly surprised by how young the artists were. They were all individuals in their early 20s playing and singing with meaning and soul and to be a part of that

The start of the spring semester held a pleasant surprise for student workers: a campus-wide pay increase of $2.00. This pulls the previous campus work-study standard of $7.50 an hour up to $9.50, a significant improvement from what had been only a quarter above the federal minimum wage.

Kendall Stephens: A Helping Hand in the Helping Profession

The Community College of Philadelphia is grateful to have someone as humble and striving as Kendall Stephens, a 33-year-old black woman of trans experience who is also an advocate and activist for the various communities she is in, be them African American, Caribbean, LGBTQ+, or just a student of the college. Approaching her final semester at the college with all of her achievements and the possibility of transitioning from CCP to the University of Pennsylvania, she

Video killed the radio star in the late seventies according to The Buggles, though maybe  we should start saying nineteen-seventies as we enter a roaring twenties of a new century. Now, we are on the verge of another death as social media makes it attack on print newspapers. Facebook, Twitter, Instagram. Whatever your flavor, if not them all, social media has pushed past print since 2017,

as reported by the Pew Research Center, with one in five U.S. adults opting out for social media as their primary news source.

Hold on to your “Okay, Boomer,” head shaking SMHs, teeth-sucking, or whatever brand of rebellious attitude each generation is known for. There is a consideration that all should have to this changing approach in how we get our news. How much will opinion go unchecked? Everyone is entitled to their opinion

Jam & Jelly: The Art Museum Goes to The Future

Have you ever wondered what the future of humanity might look like? Overpopulation, war and rising sea levels are no longer a thing of the distant future, they are real-life problems that will affect our way of life as we know it. We often hear these problems on the news but are not very often shown solutions. Over at Philadelphia’s very own Art Museum, art and science have collided to present us with a few solutions and options for living in the future.

The exhibition is very appropriately named Designs for Different Futures and is free with admission to the museum. Immediately upon entering the exhibition, you are transformed into a different time by Q, The Genderless Voice.  This voice is unique in that it is not distinctly male or female. It is the first completely gender-neutral voice assistant, created by blending voices of both male and female. This sent a message to all who were entering, that this was a different world, a world we may not completely... more

Do More with Less: An (Unintentional) Letter to Community College Students 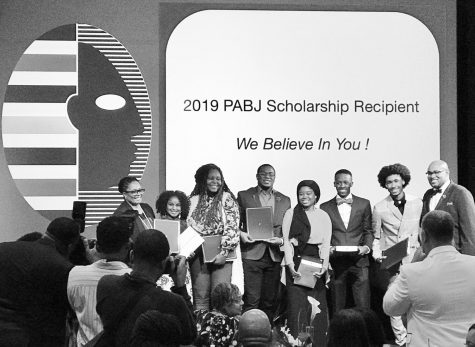 At the beginning of the Philadelphia Association of Black Journalists award ceremony, Cheryl Thompson-Morton, program manager at the Lenfest Institute for Journalism, and speaker at the Awards advised the audience that PABJ has been successful at doing “more with less”. As a Community... more

From Pain to Peace; From Anger to Love

In October of 2019, a courtroom scene was viewed

middle of the courtroom and hugged Amber Guyger, a

woman who was sentenced to ten years in prison for the

received many raised eyebrows as many people revealed

their state of shock of that rare moment. As stated by

News One Writer Bruce C.T. Wright, “It’s not every day

you see such acts of compassion in a court of law, especially

when Black people are the victims.” To set everything

straight about the issue, Brandt Jean explained his

motives in an article titled ‘I Truly Forgive Her’:

When I went to see Starcrawler at Boot & Saddle on October 26th, I wasn’t sure I’d like them.

Leading up to it, my best friend Brandi, who also used to go to CCP, would not stop telling me how amazing they are. They nearly opened for her favorite group, The Distillers, before their concert was rescheduled, and they did a cover of Pet Sematary by The Ramones for the movie remake. I made sure I listened to the cover and to their biggest single, I Love LA, before the concert. They’re just alright, I thought to myself.

I left the concert an enormous fan, and I still haven’t been able to get them out of my head.

Starcrawler isn’t just a Gen Z band; they’re a fantastic punk group that plays rock music like a well-oiled machine. Though their first album was already impressive, the release of their second album, Devour You, has shown their sound has made huge strides. Punchy, screaming riffs in songs like Bet My Brains were incredible live, though my favorites were... more

During the last week of October, politicians,

police, and press were brought to the college’s

auditorium to talk policing in the city. Lead

and the Players Coalition, as well as rapper and

to the stage to be discussed. Politicians and press

have sometimes not been able to see eye to eye,

accusations of “fake news” were brought up, and

press not being able to trust police when there

is an altercation that demands journalists cover

it. Will the police tell the truth about what happened?

Does the press have the right to stick their

noses into what cops are doing?

Members of the Players Coalition... more