“Philadelphia as a Sanctuary City: Immigration and Legal Considerations.” 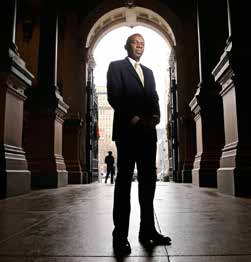 Mr. Sozi Pedro Tulante is the City Solicitor and chief legal officer for the City of Philadelphia. Before joining the City, he spent five years as an Assistant U.S. Attorney in Philadelphia, was a partner a Philadelphia law firm, and clerked for the United States District Court of Massachusetts.

Born in the Democratic Republic of the Congo, he came to Philadelphia as a political refugee in 1983 with his family and learned English in Philadelphia public schools. He has written about his experience growing up as a refugee in North Philadelphia.

RSVP online in the Colonial Community

Professors wishing to bring their class can RSVP by calling Student Life extension 8164.